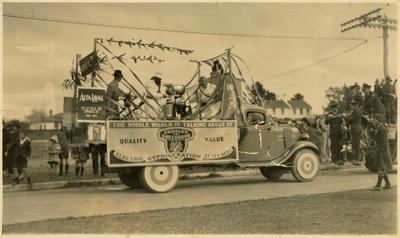 Description
An unmounted print showing a truck with display material on tray as a float in a parade. A large placade on side reads "The Whole World's Talking About - Crossley tri Shelvador - Quality Value - Electric Refrigeration At Its Best". Sign on the end reads "Alfa Laval the World's Best Separators since 1876". Two men and one woman on float with large cream/milk separator and bunting. One of the men has a piece of agricultural machinery. Float is behind the Fire Brigade float in the parade. On-lookers on side of street. Handwritten on reverse in ink "Guinness Bros" "SOG (Syd Guinness) operating Planet Jnr tractor with engine running. Les, Jammie".

Guinness Brothers Ltd. opened at No.1 The Strand in 1908 and sold a wide variety of products including agricultural equipment, alcohol and insurance. The business and its owners were an important part of the community and contributed towards WW1 and WW2 fundraising (Guinness men were killed in both wars), the Municipal Band, the Fire Brigade, the Tauranga Borough Council, Tauranga Harbour Board and the Orange Festival. The store continued, in some form, until 2011. 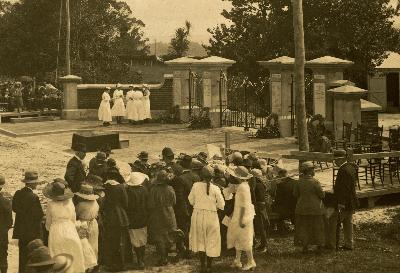