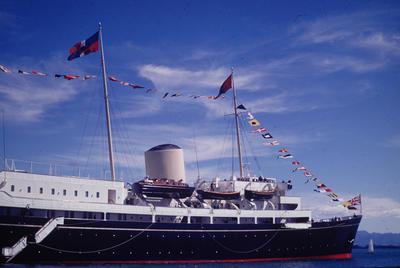 Description
A colour slide showing the royal yacht HMY Britannia on Tauranga harbour. Identified as the Royal visit to New Zealand in 1970 as part of the James Cook bicentenary celebrations. Recorded by photographer as ‘H.M.S. Britannia – Royal ‘barge’ aboard’. "The typically warm, brilliant Tauranga day greeted the Royal Family when they sailed into the harbour in the morning, aboard Britannia after an over-night voyage from Gisborne. And there was plenty of warmth, too, in the enthusiastic reception given by thousands of Bay of Plenty folk who filled the city for the short 90-minute visit. After a journey in the Royal barge from Britannia's anchorage astern of HMNZS Waikato in the Western Channel, the Royal visitors stepped ashore at The Strand reclamation shortly before 11a.m. for a ceremonial drive along a densely lined Devonport Road to the Queen Elizabeth Youth Centre". 4 April 1970, Bay of Plenty Photo News

The Tauranga Heritage Collection has more than 2000 photographic slides taken by Robert Gale. Robert and his family moved to Tauranga in the early 1960s and he taught at Merivale School until retirement. Robert was a member of the Tauranga Photographic Society for many years. We ask that you publish an acknowledgement, or 'attribution', to Robert Gale when using this image.

Credit line
Gifted by the Gale family and Alf Rendell