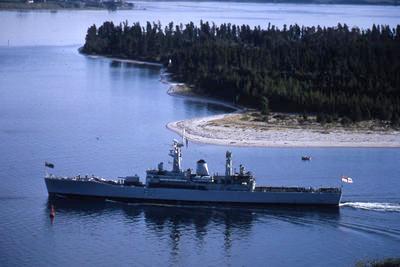 Description
A colour slide showing a frigate passing Matakana Island, which covered in trees, and entering Tauranga harbour. Recorded by the photographer as ‘Frigate ’Waikato’ in Tauranga harbour entrance’. "Described as the most modern warship of her type in the world, New Zealand's Navy's new frigate, HMNZS Waikato, berthed at Mount Maunganui at the end of her maiden voyage from England. During the journey she called at the Azores, Trinidad, Balboa, San Diego, Hawaii and Pago-Pago. The sea was flat calm and weather conditions were brilliant as she sailed into the harbour past the Mount." Bay of Plenty Photo News, 24 June 1967

The Tauranga Heritage Collection has more than 2000 photographic slides taken by Robert Gale. Robert and his family moved to Tauranga in the early 1960s and he taught at Merivale School until retirement. Robert was a member of the Tauranga Photographic Society for many years. We ask that you publish an acknowledgement, or 'attribution', to Robert Gale when using this image.

Credit line
Gifted by the Gale family and Alf Rendell